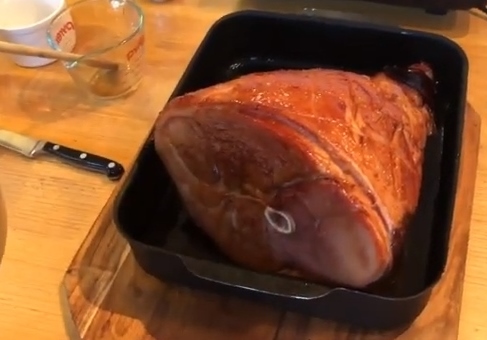 We were lucky enough to have Arum Nixon, Top 5 Contestant from Masterchef 2017 provide us with this great ham glaze recipe.  Have a look at his thoughts and the recipe below.  You can also watch our You Tube videos on how to make the glaze, how to carve your ham and where our amazing pasture fed pork comes from.

I don’t have much of a sweet tooth, so I like to balance out the sugar in a glaze. This is a simple recipe, but brings out all the amazing flavour of the beer – and the slight bitterness from the hops and acidity of the vinegar balances the sweetness perfectly. I use a great local brew from Modus Operandi called Former Tennant Red IPA; the citrusy hops and dark caramel flavours are a perfect match for the salty ham. Whatever you choose to use, go with a full-bodied beer and don’t skimp on the quality.  Stout and porter also work well.

Michele Lyons spent 25 years working in the corporate environment with 10 years as an Executive Assistant at a senior level. A couple of years ago Michele decided to forgo the long hours in the city to work closer to home and spend more time with her two teenage boys. Michele started working with us at the Farmers Markets and her excellent organisation skills meant she quickly moved into the office. Since Michele joined The Free Range Butcher her role has expanded to include all things administration, recipe testing, inspirational ideas, marketing, communications and all round keeping the team organised and on track. As long as Michele’s has had her morning coffee you can ask her anything!
View all posts by Michele Lyons →