You are here: Home › Newsletter › An Encounter With Gaz the Boreman 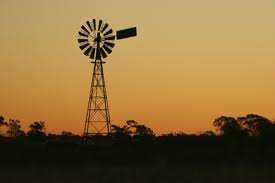 I arrived in the Northern Territory in early February; the first round of mustering was yet to start. As we waited for the end of the wet season to finish, we worked close around the homestead – fencing, cleaning out water troughs, moving small groups of stock to new water and fresh feed, and helping the mechanics do repairs. One morning at breakfast Ray the Manager told me and one of the other jackeroos we would be helping the bore mechanic for the rest of the week. Up until this point I hadn’t had much to do with Big Gaz. Of course, he was a shorter style of bloke, typical bush mechanic with massive hands and forearms the size of my thighs. His face was in a permanent frown, like someone had their hands on the side of his face pushing the skin towards his nose.

About 15 minutes into our first trip I had figured out that we were moving a windmill. I’m sure what he was saying was making sense but with the noise of the truck, and most of his noise coming out of his nose, I couldn’t understand a thing. We got out of the truck in front of a towering windmill, only just turning in the morning sun. I could be wrong, but I’m sure they were known as 40’ mills and I’m presuming that is because the centre is 40’ off the ground. At the time it seemed 100’!

For the first time, I understood what’s going on. Big Gaz tells us the plan: Take down the fans first, then lower the top mechanics, take it apart piece by piece, and then, “move it over there”… as he points off into the distance.

Reality had hit… I voiced up about my issue with heights. Gaz doesn’t care and before long I’m up the windmill, white knuckled and sweating. Gaz’s idea of a safety harness is short lengths of rope and I can’t do a thing, I’m terrified. After knocking the mill out of gear, Gaz ties the big fan wheel up to the frame of the mill and then we start to unscrew the fans before lowering them to the ground. The fans themselves were much bigger than me, and it was a job in itself staying on the platform, but I’m slowly getting used to the height. This is of course where it gets interesting; as we take the fans off the wheel the centre of gravity moves and the lightest part of the wheel (which we are working on) wants to go to the top. So get this… Big Gaz tells us to GET ON THE WHEEL and weight it down as he unscrews it. I can handle a fair bit but this had gone too far, I tried to explain about the weight and that we should take the fans off at 12, 3, 6 and 9 o’clock to balance it out, but to no avail. I now had a very angry, short, massive handed man screaming at me whilst I was some forty feet in the air… so I got on the wheel.

It really was a lovely morning. At eight o’clock, it was already hot and as I stood on that wheel shaking, the sweat dripped down my nose. Gaz tied the wheel up again after removing another fan blade and started on the next one, but because of the weight the wheel kept swinging. Well that was it for me. I started screaming and wanted out. Both my mate and I jumped off the wheel and told Gaz to go powder his nose (so to speak). We climbed back down to earth with Gaz hurling nuts and bolts at us as descended the ladder.

We grabbed our lunch and sat behind the Landcrusier away from the incoming shrapnel, and in the most extreme example of stubbornness I have ever seen, Big Gaz took all the fans off the wheel himself that day.

Gaz and I didn’t get on after that. The station manager thought it was good crack and would send me out every now and then, but my lesson was to keep my feet planted firmly on the ground.