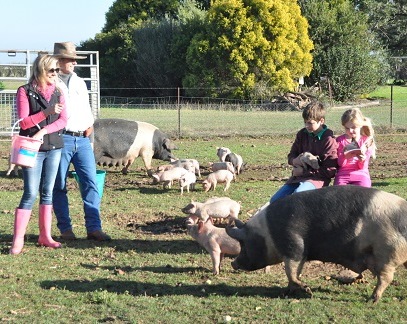 I’ve mentioned our new pork producer Jack Hewitt a few times now so we thought I’d let you know a little more about who he is and his company, Oakleigh Pasture Pork, which is Gunnedah, Northern NSW.

When you talk to Jack about his pigs you can feel the passion he has for what he does and hear the pride in his voice as he talks about the day to day work and care he takes in raising his pigs. Jack’s family has been involved with stock for over 3 generations and have always been around animals. Not only does he have pigs but he also farms some sheep and cattle. Jack started to seriously look into increasing his pig production in 2011. Remembering how good it was to be amongst the animals when he was a child he wanted to have the same for his children and in a way where they could be involved on a daily basis and be hands on. The pigs are a wonderful animal for this and today his young children, Ben and Mooey, are helping Jack look after the pigs and provide plenty of cuddles for the piglets! The other major driver was to produce a great tasting product because nothing else was comparing to his own meat.

Jack’s pigs are treated so well and he just loves them, this also means he is very particular about who he sells his pigs to and is in tune with the same philosophies as The Free Range Butcher where the animal is free to do as it pleases and is able to display its natural behaviours. Currently there are 30-40 sows and 200 growers at Oakleigh and they are a mix of Saddleback, large black and Landrace. A typical day for Jack is to be out of the farmhouse at daybreak to feed the calves and pigs. During the day he will check on them, talk to them and give them a few eggs as a treat. Then it’s time to get stuck into the jobs of cleaning water troughs, building a new pig hut and general farm jobs. Jack’s partner Jen is also just as much a fan of these pigs as Jack and plays a key part in caring for them. Jen also does a great deal of behind the scenes work that helps make Oakleigh Pasture Pork a successful and enjoyable family business.

We can clearly see that Jack loves what he does but there must be some challenges and when we asked him he said it was making sure they are warm, dry and happy in winter and cool in summer. To do this he ensures they have plenty of straw in winter and builds them huts to sleep in. When summer hits and we have heatwaves like we did earlier this year then they have wallows to soak in and shade protection from the sun.Jack rests easy at night knowing the animals will be comfortable in the cold and have shelter from the rain.

His two Maremma dogs play an important part in all this too. They are wonderful guardian dogs for all the animals and protect the young from danger such as foxes.

Naturally we asked Jack for a cooking tip and he said one of his favourite meals to make is with his pork chops.

For more information about Jack and Oakleigh Pasture Pork check out his Facebook page: www.facebook.com/oakleighpasturepork.