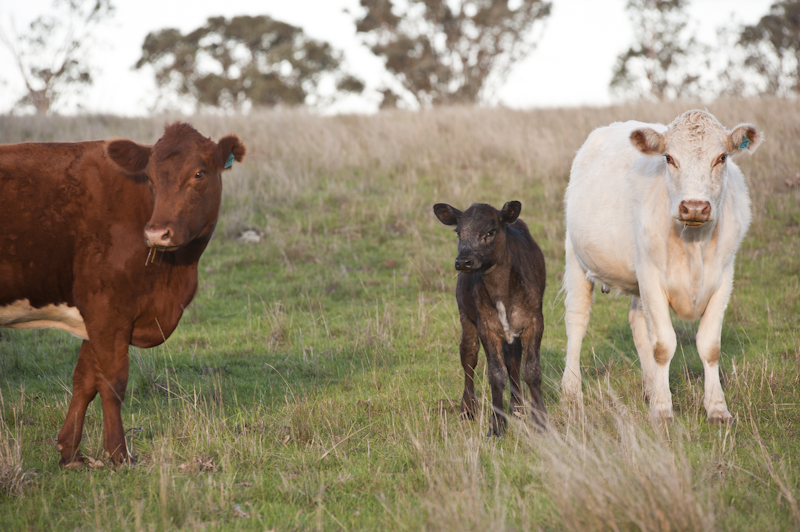 Grass Fed versus Grain Fed – there are numerous articles around the pros and cons and the impact on our Health. The fact that you are reading this may mean that you are considering buying or have bought from The Free Range Butcher and are therefore conscious of how your meat is produced and how this effects your own health. We are very conscious of this too and are passionate about free range, grass fed meat. Our animals are farmed in the traditional way, they are allowed to roam the paddock and graze as they please; they are also free of antibiotics and hormones.

What is the issue around Grain Fed Meat?

Most beef produced and finished in Australia for local consumption is fed a grain mix used to fatten them up quicker. This would be all well and good if a cow’s digestive system was designed to digest grain – but it wasn’t. Grass eating animals such as cows and sheep have a rumen which acts like a fermentation tank containing necessary bacteria to break down the grasses and convert them to protein and fats.

Switching a cow from grass to grain is so disturbing to the animal’s digestive process that it can kill the animal if not done gradually and continually fed antibiotics. A small-scale American cattleman (and now a very successful author), Michael Pollan, wrote an article for the New York Times about what happens to cows when they are taken off of pastures and put into feed lots and fed grain:

“Perhaps the most serious thing that can go wrong with a ruminant on corn is feed lot bloat. The rumen is always producing copious amounts of gas, which is normally expelled by belching during rumination. But when the diet contains too much starch and too little roughage, rumination all but stops, and a layer of foamy slime that can trap gas forms in the rumen. The rumen inflates like a balloon, pressing against the animal’s lungs. Unless action is promptly taken to relieve the pressure (usually by forcing a hose down the animal’s oesophagus), the cow suffocates.”

This obviously isn’t good for the cows, and we’re eating these cows so what are the consequences for us? Grain fed animals that are continually fed antibiotics to survive leads to the development of antibiotic resistant bacteria. These are the “superbugs” that are increasingly rendering our “miracle drugs” ineffective. It is also the reason for the heightened prevalence of E. coli O157:H7, found in an undercooked Hamburger. In some people, this type of E. coli may also cause severe anaemia or kidney failure, which can lead to death.

We could go on about the negatives of Grain Fed Meat such as the impact on the environment and that it has twice as much saturated fat as Grass Fed Beef but instead let’s look at all the positive reasons to eat Grass Fed Meat. Here is a dozen ways why Grass Fed Beef is better for our health…

So, over to you – do you think it’s important to eat Grass Fed Meat rather than Grain Fed? And can you taste the difference?